Skip to content
Previous Next
A Pitchfork to the Temple

Dec 2018
A Pitchfork to the Temple 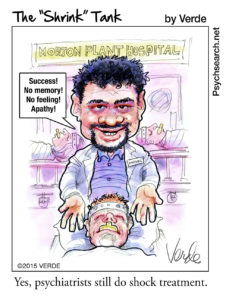 The last memories pigs have before they are slaughtered are electrodes being attached to their heads. A moment later they are stunned with a jolt of electricity that blasts its way through their brains. This induces an epileptic seizure which renders the hog insensate, not responsive to any stimuli, and floppy. They are now ready to be butchered.

This very scene of pigs being shocked into unconscious numbness on their way to the slaughterhouse was the the twisted revelation that inspired the invention of psychiatry’s most deadly legacy: shock therapy. It’s hard to imagine the butchery of livestock being the aha moment for a new cure to bring sanity to the insane. But that’s exactly what it was for one Ugo Cerletti, resident of 1938 fascist Italy, who was the first to attach a live wire to someone’s temples, flip a switch, and blast electricity into their head in the name of healing.

Brain damage as a “cure” was born.

Two years later, at the American Psychiatric Association’s 96th annual meeting in downtown Cincinnati, psychiatrist Douglas Goldman strapped one of his luckless charges to a table in front of a crowd of eager psychs and fried the patient’s brain with a current of crackling electricity. Of course, by then the procedure had been improved. Unlike Cerletti’s patients, this doomed soul was injected with the poison curare to paralyze his muscles. This moderated the vertebrae-cracking force of the convulsions he experienced.

Brain damage as a “cure” arrived to the States.

Since its emergence from Hell some eighty years ago, the electric shock machine in the hands of psychiatrists around the world — and in your hometown — continues to ruin the lives and damage the brains of millions while lining psychiatry’s pockets with billions.

Despite all the evidence making it clear to any decent person this is a barbaric procedure and needs to be banned immediately: brain damage, permanent memory loss, lifelong mental deterioration and emotional instability, diminished reason, and, the psychiatrist’s favorite result, increased tractability and docility, shock therapy continues to be practiced worldwide. But the end of shock therapy may be closer than ever. As reported by Peter Breggin, MD, in October:

A long-awaited major electroconvulsive therapy case that was on the eve of trial just settled…While the settlement amount remains confidential, as an expert in the case I am pleased to report that this resolved litigation is a significant victory. The evidence secured has paved the way for more suits against ECT manufacturers that are on the way!

The lawsuit against the ECT manufacturer had its critical breakthrough when the California judge recently allowed the case to proceed to jury trial after their motion for summary judgment was denied. The judge’s decision has effectively established the methodology for bringing this and other lawsuits against ECT manufacturers for their failure to warn of known or knowable risks of brain damage caused by ECT.

Eight decades ago a devil in a lab coat stuck his glowing pitchfork into the temple of a doomed human being and called it a “cure”. Today is the day to send him and his demonic device back to Hell.

During these last eight decades,

In 1940, curare was introduced to moderate the vertebrae-cracking force of the convulsions,

Their publications created a major stir in psychiatry, and in May of 1940, Cincinnati psychiatrist Douglas Goldman, M.D., demonstrated ECT at the annual meeting of the American Psychiatric Association (Shorter, 1997).

under the oppressive Working in fascist Italy of 1938, one Ugo Cerletti An Italian doctor, working under one to

Perhaps the backdrop of this bleak piece of history

It will come as no surprise the barbaric practice that is electroshock therapy was invented in Fascist Italy in April 1938. One Ugo Cerletti

When pigs emerge from the chamber, they are floppy and do no respond to any stimuli, which ensures they will feel no pain when processing begins.

Other pig and sheep plants use electrical stunning, in which electrodes are applied to the head and neck of pigs and a pulse of electricity is applied to cause instantaneous unconsciousness.

Stunning Methods
Electric Stunning
To induce instantaneous insensibility, electrical stunning must induce an epileptic state by passing an electrical current through the pig’s brain (Hoenderken, 1978, 1983; Warrington, 1974; Croft, 1952, Lambooij et al., 1996, and Gregory, 1998). There are two basic types of electrical stunning. Head only where the tongs are placed across the head and cardiac arrest where a current is passed through both the head and heart. Head only stunning is reversible and the pig will return to sensibility unless bled quickly. Cardiac arrest stunning will kill most of the pigs by stopping the heart. For pigs, the amperage that is required to induce epilepsy is 1.25 amps (Hoenderken, 1978-1983). There also must be sufficient voltage to deliver the current. The recommended minimum voltage is 250 volts (Troeger and Woltensdorf, 1989).

The idea to use ECT in humans came first to him by watching pigs being anesthetised with electroshock before being butchered, as a kind of anesthesia, and so he convinced two colleagues, Lucio Bini and L.B. Kalinowski (a young German physician) to help him in developing a method and an apparatus to deliver brief electric shocks to human beings

The idea to use ECT in humans first came to Cerletti from watching pigs being anesthetised with electroshock before being butchered. The story goes, that on his way home he stopped at a butcher shop. The shop didn’t have the cut of meat that he wanted and he was told to walk back to the slaughter house behind the shop to have the cut made for him. At that slaughter house, the technique used for butchering cattle involved an electric shock to their heads. This would cause the cattle to go into seizures and fall down, making it easy to slit their throats. In that time period, people believed that seizures were essential in preventing schizophrenia, since many believed that those diagnosed with epilepsy were immune to the disorder. Due to this, Cerletti reasoned that Electric Shock might be useful in Humans as a treatment for schizophrenia.

Their publications created a major stir in psychiatry, and in May of 1940, Cincinnati psychiatrist Douglas Goldman, M.D., demonstrated ECT at the annual meeting of the American Psychiatric Association (Shorter, 1997).

Are China’s kids being electroshocked for internet ‘addiction’