The Island Now
Readers Write: In defense of Trump’s mental health
May 19, 2020 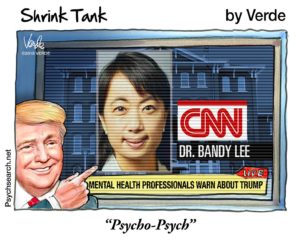 … There are so many things that Mr Sobel erroneously blames Trump for, such as increased homicides, suicides, and tension in the world, I can’t go into them all.

But the last ridiculous, false statement Sobel makes is when he cites Dr. Bandy Lee, a psychiatrist who held a conference that led to publication of a book titled “The Dangerous Case of Donald Trump.”

Dr. Lee invited thousands of psychiatrists to attend this conference, including me, but only 20 showed up. She has been discredited by many other psychiatrists, including Dr. Allen Frances, a Democrat who hates Trump and is chairman of the psychiatry department at Duke.

He called her book “silly” and accused her of forming a diagnosis of Trump without meeting him.

Mr. Sobel is correct about only one statement he made, when he said, “Her (Dr. Lee) professional organization, the American Psychiatric Association, passed the Goldwater Rule, which states it is unethical to give professional opinions about public figures without meeting them.

The APA made this rule stronger in 2017, when it ruled psychiatrists could not make any statements about public figures at all publicly.

Dr. Lee wanted to send a letter to Congress calling Trump “dangerous,” and invited thousands of psychiatrists to sign it. This time no other psychiatrist would sign this letter, because they knew Dr. Lee was wrong and unethical….