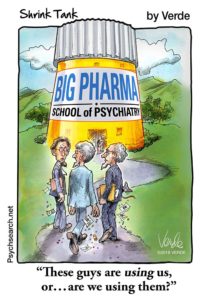 On July 10, 2010, Stewart Dolin a happy, funny, loving, wealthy, dedicated husband and father, started taking Paxil, as prescribed by his psychiatrist. Six days later, in the middle of the afternoon, he leapt off of a subway platform and into the path of an approaching train.

How do the biggest drug pushers poison the world for profit and get away with murder? Just ask GlaxoSmithKline, one of the kingpins in the pill pushing cartel known as big pharma. GSK has perfected the playbook of turning drugs they know to be deadly and dangerous into billions in profit. Since the 1990’s, despite unfavorable studies, expensive lawsuits, and countless suicides Paxil has made GSK very wealthy. How did they do it?

They gagged an FDA drug safety officer by the name of Dr. Andrew Mosholder who was aware of various studies which indicated antidepressants such as Paxil increased suicidal thoughts, suicide attempts, and suicides. He was scheduled to present his findings at an FDA advisory meeting but was disallowed by his superiors. Twenty-three committed suicide during Paxil clinical trials, forty attempted suicide.

They funded the studies to produce the outcomes they needed to get Paxil approved by the FDA. This is known as the “Funding Effect” and skews data collection and the interpretation of test results away from the unfavorable.

They helped revise the psychiatrists’ bible, the DSM (the Diagnostic and Statistical Manual of Mental Disorders). The DSM panel that modifies the diagnostic criteria for mental illnesses such as depression is composed entirely of members with financial ties to big pharma.

They hired a ghostwriter by the name of Sally K. Laden to turn 1400 pages of their own unfavorable and damning studies into a whitewashed study full of the positive data only. Some of the biggest names in psychiatry were named as authors of this report.

They hired the Cohn and Wolfe PR agency to push out false statements promoting Paxil’s “REMARKABLE efficacy and safety in the treatment of adolescent depression,” despite studies showing children given antidepressants were almost twice as likely as those given placebos to become suicidal,

They received millions of dollars of free advertising with a planted and carefully worded Newsweek cover story touting Paxil and other antidepressants for treating teen depression and turned teenage angst into a mental illness caused by a “chemical imbalance” that could only be treated by antidepressants.

They paid high-profile academic psychiatrists like Charles Nemeroff hundreds of thousands of dollars to jet around the country and give talks about Paxil to doctors at fancy restaurants.

They hired the top lawyers in the country to fend off numerous product liability lawsuits against Paxil. Lawyers Andrew Bayman and Todd Davis defended GSK in Stewart Dolin’s wrongful death lawsuit that went to trial in 2017.

This is how big pharma gets away with murder and makes a financial killing in the process.