Skip to content
Previous Next
The Shrinks are Shrinking 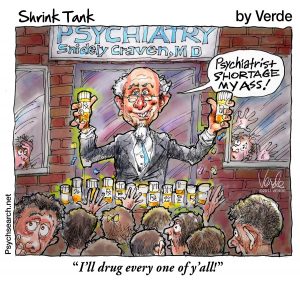 “Psychiatry is in decline and is becoming obsolete.”

This statement does not come from an anti-psychiatry group or a former patient with an axe to grind or a dubious website. This quote comes from an article published by The British Journal of Medical Practitioners, a professional, peer-reviewed online medical journal. The title of the article says it all Psychiatry in Decline. How does the author, a noted English psychiatrist, make his point? Plentifully, honestly and accurately:

● Psychotropic drugs are perceived as a form of control by psychiatrists towards their patients.
● Psychiatrists are denigrated for being in the grip of Big Pharma and perceived as drug pushers.
● Shock therapy is considered barbaric.
● Psychiatry is a victim of its own psychobabble and increasingly mind-numbing research.
● Outcome studies are quoted as favorable, when the very principle of their foundations is very shaky.
● Abuse of psychiatric practice does occur. (As readers of PsychSearch are well aware.)
● Political regimes throughout the world have used and still use powerful psych drugs to subdue and control individuals who challenge the authority of the State.
● Psychiatry has been used by some totalitarian regimes to enforce political control: Nazi Germany, the Soviet Union and apartheid in South Africa.

Not a favorable outlook. But not only is psychiatry becoming obsolete, the number of psychiatrists is also shrinking.

According to one leading journal of healthcare policy, the population of US practicing psychiatrists declined between 2003 – 2013. Interestingly, during the same period the number of primary care physicians grew. In 2012, U.S. News & World Report discussed the trend of the declining number of US medical students choosing psychiatry as a specialty. This downturn is on top of a psychiatric shortage, the same article claims.

In July, when asked about the shortage of psychiatrists, the president of the World Psychiatric Association, Dinesh Bhugra, lamented the dour future of psychiatry. He told PsychSearch that a dwindling number of students were interested in pursuing psychiatry and they needed to improve recruitment and training of new students.

Psychiatry is a dying profession. Its theories are outmoded and inaccurate, its practices inhumane and ineffective, its numbers declining.

The shrinks are shrinking.

The Shrinks are Shrinking