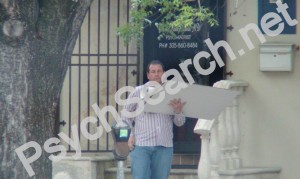 The Associated Press
By KELLI KENNEDY
The federal government has stopped reimbursing a Miami doctor who wrote nearly 97,000 prescriptions for mental health drugs to Medicaid patients over 18 months, in a case that prompted a key Senator to call for a nationwide investigation.

U.S. Sen. Sen. Charles Grassley of Iowa said Dr. Fernando Mendez Villamil wrote an average of 153 prescriptions a day for 18 months ending in March 2009. That’s nearly twice the number of the second highest prescriber in Florida, who wrote a little more than 53,000 prescriptions, according to a list compiled by state officials.

Grassley, an Iowa Republican and ranking member of the Senate Finance Committee, which oversees Medicare and Medicaid, called the figures alarming and sent a letter Wednesday to the Department of Health and Human Services asking the agency to investigate top prescribers across the country. His inquiry comes as the government targets waste and fraud in the taxpayer funded programs.

HHS officials said they were aware of Florida’s list of high prescribing doctors and were working closely with the state and federal agencies that investigate Medicaid fraud, according to a statement from Sec. Kathleen Sebelius’ office.

Dr. Villamil hasn’t been reimbursed by Medicare since May when HHS started investigating him.

An employee at Villamil’s office declined to comment and a voicemail left at his office Thursday was not immediately returned.

“It’s hard to believe that this dramatic level of activity could go unnoticed,” Grassley told The Associated Press.

“It’s a matter of program integrity, taxpayer protection and patient safety,” added Grassley, who asked HHS officials to explain whether and how the agency tracks high-prescribing doctors.

The vast majority of the doctors near the top of Florida’s list are in the Miami area, where Medicare fraud totals over $3 billion a year, higher than any place else in the country.

“The highest prescribers are always in Miami,” said Karen Koch, vice president of the Florida Council for Community Mental Health. “They tend to use medication more maybe than in some others areas and then sometimes it’s an anomaly in the data.”

Koch said that some doctors on the list have multiple practices with other prescribers using their license, which is legal. The state also has a shortage of psychiatrists, meaning a smaller number of doctors are serving more patients each.

And sometimes patients doctor shop with the intention of selling the drugs, which also drives up prescription numbers.

The drugs that Villamil, a psychiatrist, prescribed most commonly included Seroquel, Zyprexia and Abilify.

Seroquel is the only drug that has street value in the United States. “When snorted, it acts like cocaine,” said Koch. The other drugs “have high street value in South American countries because it is not available there so families in the U.S. are always trying to get it for their relatives there,” she said.

The state’s top prescriber list is part of the Medicaid Drug Therapy Management Program, which began monitoring mental and behavioral health medications when the program was created in 2006.

“The number of prescriptions recorded for Dr. Fernando Mendez-Villamil is high when compared to other Medicaid prescribers,” state Agency for Health Care Administration spokesman Sue Conte said in an e-mail to The Associated Press.

However, she said “it does not indicate that there is anything improper regarding his prescribing,” saying patients seeing a specialist like Villamil would need daily medications plus medications for acute episodes. Villamil’s prescriptions also included refills, she said.

If a concern arises, AHCA’s Office of Inspector General will more thoroughly investigate billing practices and prescribing patterns. If fraud is suspected, the case is sent to the Florida’s Attorney General. About 123 cases were referred to the Medicaid Fraud unit in the past fiscal year, according to AHCA.

A spokesman for Florida’s Attorney General said the office has a pending investigation into Villamil, stemming from a 2007 request from a private citizen. She declined to comment further.

A Florida doctor who prescribed several mental health medications to a 7-year-old foster care boy who killed himself in April is also on the list. The drugs carried a special FDA black box warning indicating they can cause suicidal thoughts and are not approved for young children, though some doctors still prescribe them to treat children.

Dr. Sohail Punjwani wrote 10,150 prescriptions during the same two year period, according to the report.

Dr. Punjwani, who has appeared on the high-prescriber list multiple times but has never been sanctioned, did not immediately return a phone call left by The Associated Press on Thursday.

Grassley’s letter comes months after Gabriel Myers hung himself with a shower cord at his foster parents’ home while under Punjwani’s care. The boy’s death prompted debate at the state’s child welfare agency about stricter rules for prescribing powerful antidepressants and other drugs to foster children.