Forensic Psychiatry* – a subspecialty of psychiatry which applies to legal issues. There are two major areas of criminal evaluations in forensic psychiatry. These are Competency to Stand trial (CST) and Mental State at the Time of the Offense 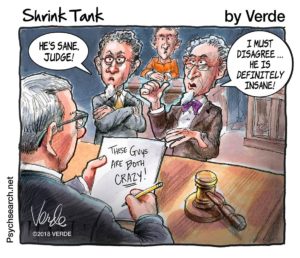 The American Psychiatric Association wants the world to know that mental illness is a disease just like heart disease or diabetes. This is simply not true. Diseases have biomarkers which can be tested for and proven to exist. A real doctor can examine an x-ray and diagnose heart disease or read a blood test and confirm diabetes. With this information they can work to stop the disease and return the patient to health. Not so with psychiatrists and mental illness. Biomarkers do not exist for mental illness.

Where psychiatrists’ lack of scientific credibility and inability to cure patients gets most exposed for the quackery it is, is in forensic psychiatry. The defense brings their expert psychiatrist to the stand to declare their client not guilty by reason of insanity. The prosecutor counters with their own psychiatrist who claims the opposite, the defendant is sane and guilty. Both psychs speak of the mysterious criminal mind using psychobabble that is both incomprehensible and important-sounding in the hopes of dazzling the judge and jurors. Neither “expert” can prove their case by any objective measure. Instead they must rely on subjective guesswork to sway the judge and jury.
One of the more recent high-profile cases of this very sort of forensic psychiatric fraud was the trial of mass murderer James Holmes who, in 2012, killed 12 and injured 70 in the Aurora, Colorado theater massacre.

Holmes’ lawyer made his case with these words in the courtroom, “When James Holmes stepped into that theater in July 2012, he was insane. His mind had been overcome by a disease of the brain that had plagued him and pursued him for years.”

The prosecutor’s case was the opposite. He brought his expert to the stand and asked, “Is it your opinion that on the period of time that is applicable to these proceedings that the defendant, James Eagan Holmes, met the legal definition of legal sanity?”

More despicably, it was the action and inaction of one psychiatrist BEFORE Holmes’ bloodbath that deserved to be tried in a court of law. Four months prior to the killings, Holmes’ started seeing psychiatrist Lynne Fenton. Fenton learned of Holmes’ thoughts of killing others and his desire to not tell her everything for fear she would report him. She prescribed him the antidepressant Zoloft — with side effects that include becoming aggressive or violent and acting on dangerous impulses. Under the influence of the drug, he became grossly psychotic and began elaborating his plans and collecting weapons.

Holmes’ last visit with Fenton was on June 11, 2012. At this time, he had been on Zoloft for 75 days. Six weeks later, seventy left the Aurora movie theater in ambulances, twelve left in body bags. Holmes left in handcuffs.