Skip to content
Previous Next
Michael Robertson, Anchorage Psychiatrist faces a maximum sentence of up to 10 years in prison 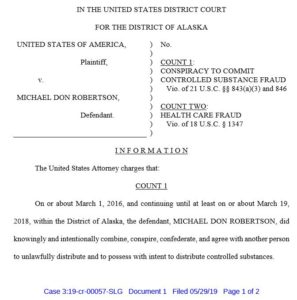 After losing his medical license, an Alaska doctor has pleaded guilty to spearheading a drug conspiracy involving overprescribing dozens of patients, nonexistent records for a handful of others and nearly $200,000 worth of opioids.

According to the plea agreement, Robertson intentionally distributed controlled substances “without a legitimate medical purpose” from May 2015 through March 2018. He surrendered his medical license in May 2018 due to the investigation.

“[Robertson] caused claims to be submitted to Medicaid regarding these 790 prescriptions, resulting in Medicaid paying $3,286.87 to [Robertson’s] medical practice based on those claims,” the agreement states. “Further, Medicaid paid $3,601.52 to pharmacies for these 790 controlled substance prescriptions.”

The agreement states the court may impose additional fines and order Robertson to pay $6,888.39 in restitution to Medicaid.

In a release announcing the deal, the U.S. Attorney for the District of Alaska Bryan Schroder said his office and the Drug Enforcement Agency are focused on investigating and prosecuting these kind of cases.

“The diversion of prescription drugs is a significant cause of the opioid crisis,” Schroder said. “It is especially disappointing when the pills are diverted from appropriate medical use by physicians — those we trust to protect the health of the public.”

A sentencing hearing in the case is scheduled for Oct. 25.