Skip to content
Previous Next
Psychiatry: Poisoning the American Mind

PsychSearch.net
Psychiatry: Poisoning the American Mind
By Colin Taufer
May 2018 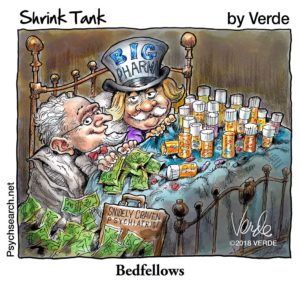 The common denominator of every psych drug is what it does neurologically. Each one, regardless of what its manufacturer claims it does, poisons the brain, causes severe biochemical imbalances in the brain, and impairs neurotransmitter systems. They are destructive and poisonous to the nerve cells within the brain. In short, they are brain-disabling neurotoxins .

Forget empathetic talk therapy or time-consuming psychotherapy. Psychiatrists make two, three, four times as much money being prescription pushing drug dealers for Big Pharma as they do as “therapists” . The more psychiatric neurotoxins per patient the better.

One unbelievable but true measure of how awash Americans are with psychiatric neurotoxins is this. Last year, the American Chemical Society published a study that found the number one pollutant found in fish in the Niagara River was antidepressants !

From the cradle to the grave, no segment of the population sits outside their sights. Children 2 years old and younger are being given antipsychotics regularly, the number of youth taking antidepressants is growing, and over the last decade the number of US senior citizens taking three or more psych drugs more than doubled Across the boards, in every age group, the percentage of Americans taking psychiatric neurotoxins continues to climb.

But this is not enough for the Big Pharma drug cartel and their psychiatrist pushers. They’re targeting more neurotoxins for every demographic and are on the way to full saturation: an entire population hooked on brain-disabling psych drugs.