Skip to content
Previous Next
Psychiatry’s Bible Under Attack 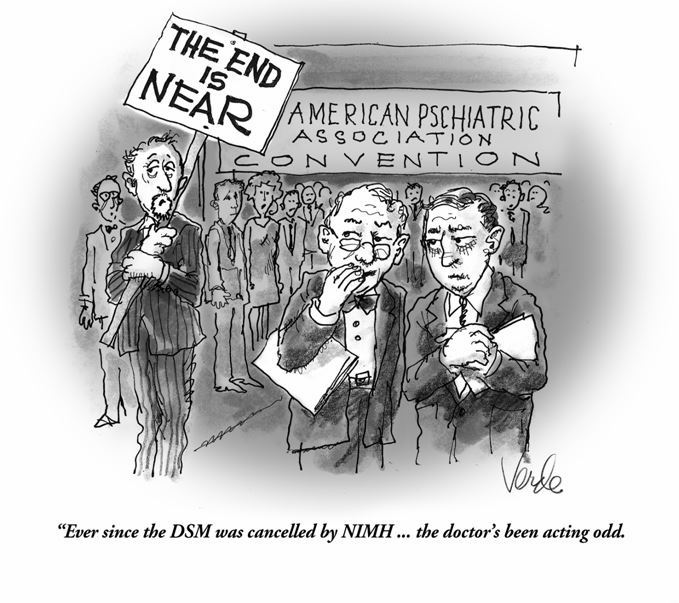 Psychiatry’s battle-scarred bible of mental disorders — known as the DSM — continues to face a barrage of criticism even as the latest version (DSM-5) is just days away from official release.

The Diagnostic and Statistical Manual of Mental Disorders has been published since 1952 by the American Psychiatric Association to identify and classify mental disorders. Its last major revision was in 1994. With every revision, there are critics.

But among the legions roiling against this new version, a literary assault has now emerged. An array of books strategically timed to the new version being released at the organization’s annual meeting in San Francisco (which begins Saturday) are largely aimed at its failings.

“This is not just an academic debate,” says psychiatrist Allen Frances, who was chairman of the DSM-IV task force. “It’s not just inside psychiatry. It has a huge impact on how lives are lived, how mental health dollars are spent and on the public health of the country.”

His book, Saving Normal: An Insider’s Revolt Against Out-of-Control Psychiatric Diagnosis, DSM-5, Big Pharma, and the Medicalization of Ordinary Life, is out Tuesday.

“The reason there is so much controversy about DSM-5 is that psychiatric diagnosis has become, if anything, too important — not only in clinical decisions but also in school services, disability and in the courtroom. There’s a tremendous amount at stake,” says Frances, of Coronado, Calif., a professor emeritus at Duke University in Durham, N.C.

Because the DSM contains a detailed list of psychiatric disorders, it’s a guidebook for the U.S. health care system and insurance coverage. Revisions aren’t taken lightly. This latest took more than a decade and included more than 1,500 experts and extensive public comment.

“When DSM-5 happened, everything was up for grabs. That has the risk of causing changes to be made that really didn’t need to be,” says Michael First, a professor of clinical psychiatry at Columbia University in New York who has been an editorial consultant for the DSM-5. He says any future revision will be a modification and will be termed 5.1, etc., which is why they switched from Roman numerals.

The common theme of these new books is to take aim at the heart of the manual.

Psychotherapist Gary Greenberg, of New London, Conn., has written about the DSM for more than a decade and says the DSM disorders are “simply collections of symptoms that some experts agree constitute mental illnesses. There’s not a single diagnosis in DSM that lives up to the standards of medical diseases.”

“If I as a therapist tell you (that) you have a mental disorder, it’s not the same thing as my telling you you have diabetes or cancer because diabetes and cancer are diseases that can be confirmed through biochemical findings. They meet the requirements for a disease in the way we generally think of a disease. There is not a single disorder in DSM-5 or any DSM that does that,” says Greenberg, author of The Book of Woe: The DSM and the Unmaking of Psychiatry, out earlier this month.

“The whole disease model that underlies the DSM has been an utter scientific failure,” says Stuart Kirk, a professor emeritus of social welfare at UCLA, who has been tracking DSM for decades. “There’s not a single biological marker for any of the 300-plus disorders. What we do instead is descriptive. This describing is creating a disorder and pretending it’s a medical illness rather than just human behavior.”

In his book, The Intelligent Clinician’s Guide to the DSM-5, out last month, psychiatrist Joel Paris of McGill University in Montreal suggests that DSM has some pluses but a lot of minuses.
“The strong points would be that the manual does provide a useful guide to severe mental illness and it always has,” he says. The closer that it gets to what people would consider normal behavior, the less useful the DSM is, he says.

Psychiatrist Michael Taylor, of Ann Arbor, Mich., author of Hippocrates Cried: The Decline of American Psychiatry, out last month, says psychiatry has to go back to the medical model for disease.

“The reason why so many of the syndromes don’t work out when they do field trials is that they don’t exist in biological reality,” he says. “They only exist in the DSM.”

The focus on biomarkers and away from symptoms got attention just weeks ago when a blog post by Thomas Insel, director of the National Institute of Mental Health, said the DSM is “at best, a dictionary, creating a set of labels and defining each” and that “its weakness is its lack of validity.” He says NIMH will reorient its research away from the manual because “DSM diagnoses are based on a consensus about clusters of clinical symptoms, not any objective laboratory measure.”

First says psychiatrists had hoped DSM could further research into the cause of mental disorders, but says “in that area, the DSM, unfortunately, was not successful. It was shown to be not useful for guiding research.”

Insel says NIMH will focus on a new system called Research Domain Criteria, (RdoC) to find causes of disorders, but it’s just getting underway and is not an immediate change, which means the DSM prevails.

According to the association, the last version, DSM-IV, has been worth about $5 million a year to the group in terms of book sales and related materials. The new version costs $199 for hardcover and $149 for the paperback. A comparably priced electronic version will be available later this year.

Rather than the periodic revisions of the past, First says DSM “should be modified when the science shows something needs to change.”