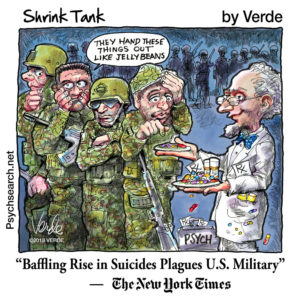 Today tens of thousands of American soldiers are stationed in the Middle East, taking the fight to our enemies so our enemies don’t bring terror to the United States. These brave fighting men and women have put themselves in harm’s way at the front lines of combat. But the greater threat to their survival is not the crazed terrorist or plotting insurgent in front of them but the sinister psychiatrist behind them.

Between 2005 and 2011, according to the Department of Defense, military psychiatrists increased the number of psychoactive drug prescriptions to our armed forces 682 percent. At the same time prescriptions written for antipsychotics to active-duty troops rose a staggering 1,083 percent. This is an onslaught no army could withstand. Our servicemen and women have no defense for this bombardment of dangerous drugs and their deadly side-effects: increased suicidal thoughts, mania, and aggression. And as prescriptions rise, so do their revenues. In 2016 alone, North American pharmaceuticals took in more than half a trillion (that’s trillion with a “t”) dollars in earnings. Blood money.

Psychiatrists know the havoc they are wreaking. Their own studies confirm the link between antidepressants and increased suicide. Here is one 2009 study that took place in a Veterans Administration clinical setting and found suicide rates were twice the base rate for soldiers on antidepressants. Before that, in 2004, the FDA concluded that the newer antidepressants double the rate of suicidal thoughts in behaviors of children, youth and young adults up to the age 24.

This is how psychiatric-induced suicide — not combat — has become the leading killer of U.S. troops deployed to the Middle East, according to the Pentagon.

This is the treason of psychiatry.