Skip to content
Previous Next
The “Church” of the Holy Label

PsychSearch.net
The “Church” of the Holy Label
By Colin Taufer
July 2018 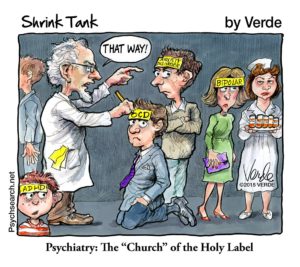 Those that knew her found Candace Downing to be a very bright little girl and an overachiever, the youngest in a loving family. When she was in sixth grade, her psychiatrist, after a very brief evaluation, decided the anxieties she was experiencing during school tests would require a prescription for the antidepressant Zoloft. Her prescription was increased before she started the seventh grade. Not long after, twelve year old Candace hung herself from her four-poster bed — another life destroyed by psychiatric labeling.

According to the bible of psychiatry, the DSM (Diagnostic and Statistical Manual of Mental Disorders), a student who is very anxious or worried about an upcoming exam is diagnosed with “Generalized Anxiety Disorder” and labeled accordingly. Like every “disorder” named in the DSM, the entry for Generalized Anxiety Disorder is simply a label which includes a set of symptoms and an insurance billing code (F41.1) but no medical explanation for the “disorder”.

Critic of psychiatry Phil Hickey, PhD, explains the dishonest and unscientific diagnostic procedure by way of an all-too-typical example:

Parent to psychiatrist: “Why is my son so paranoid? Why does he sit in his room all day? Why won’t he do anything?”

Psychiatrist: “Because he has an illness called schizophrenia.”

Parent: “How do you know he has this illness?”

Psychiatrist: “Because he is so paranoid, sits in his room all day, and won’t do anything.”

And just like that, without any objective laboratory testing or medical science to support the diagnosis, another victim of psychiatry is misdiagnosed, labeled, billed (code F20.9), and started on an endless course of expensive and dangerous psych drugs.

“The underlying science remains immature…The molecular and cellular underpinnings of psychiatric disorders remain unknown…psychiatric diagnoses seem arbitrary and lack objective tests; and there are no validated biomarkers with which to judge the success of clinical trials.” This statement on psychiatric diagnosis was not spoken by a fringe cynic of psychiatry or from its earliest days, but from one of the high priests of psychiatry himself, Steve Hyman, the director of the National Institute of Mental Health in 2013.

This is the medical malpractice known as psychiatry: an entire profession built on fraudulent science where symptoms are illnesses, labels are easy money, and treatment kills.