PsychSearch.net
The Facts and Lies of Electric Shock “Therapy”
By Colin Taufer
October 2018 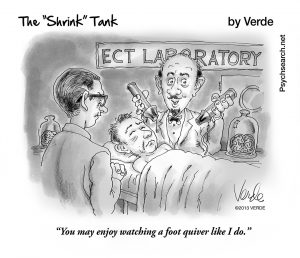 When it comes to the art of eloquently disguising falsehoods as truth, psychiatrists have no peers. They spend billions on marketing their deadly madness, turning scientifically unsound theories and destructive “therapies” into carefully crafted ad campaigns full of soothing music, pleasant pictures, and scientific-sounding explanations.

Any sane person would consider blasting electricity through the brain torture. The psychiatrist calls it therapy: Electroconvulsive Therapy, or ECT. Here is the ECT procedure as described by the American Psychiatric Association.

At the time of each treatment a patient is given general anesthesia and a muscle relaxant and electrodes are attached to the scalp at precise locations. The patient’s brain is stimulated with a brief controlled series of electrical pulses. This causes a seizure within the brain that lasts for approximately a minute. The patient is asleep for the procedure and awakens after 5-10 minutes, much as from minor surgery.

What they don’t tell you is this. The impact of the shock is so great, muscle relaxants must be used to prevent the convulsive seizures from fracturing your bones and teeth. Your ankle is tightly wrapped by a blood pressure cuff which impedes the flow of relaxant to the foot. This allows the psych to observe the jerking of your foot and twitching of your toes during the procedure. The relaxants are so powerful that your natural breathing stops. This makes it necessary for oxygen to be given to you. In this near comatose condition, 100 – 190 volts to your brain is required to generate a seizure. This much electricity is eight times the amount required to create nerve damage, according to OSHA.

In the words of those who have experienced it first hand.
“All the therapy in the world is not going to erase the scars of being dragged into a room, having a band on your head, and having your brains fried.”

“I don’t remember much. ECT erased 20 years or more of my life.”

“The shocks caused severe memory loss and intellectual disabilities. And now, I can’t recall any experiences before that time. My life as I knew it has been wiped out for me by ECT. I don’t know who I am.”

“I was forcibly electroshocked five times and tried to resist. My heart stopped on the fifth shock, and I now suffer from permanent memory loss.”

“ECT destroyed brain cells filled with memory. During my first ECT seizure my kneecap dislocated. The needle which held the muscle relaxant drug ‘slipped’ out of my arm. The kneecap was surgically removed. One of my heart valves was permanently damaged and a recent head CT scan revealed irregularities.”

“They manhandled me, grabbed me, and forced me into the ECT room. I yelled, fought, and pleaded for help. No one came to my rescue.”

In the USA, approximately 100,000 patients receive this barbaric torture annually.

Who is coming to their rescue?

(If you or someone you know has been a victim of ECT, file a complaint here with your state’s licensing agency. They have the power to investigate and take action.)