PsychSearch.net
The Most Successful Drug Dealers in History
By Colin Taufer
November 2018 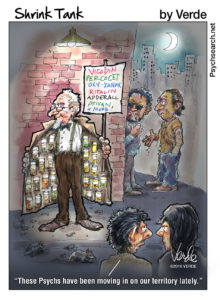 Three things today’s cops find when they bust drug dealers: cash, handguns and the psych drug Vyvanse. Just two weeks ago, the Lafayette Parish Sheriff’s Office made one of the largest drug busts in the parish’s history. The drugs confiscated had a street value of more than a million dollars. Included in the drugs seized was a batch of Vyvanse pills. It is one of the most sought after and valuable street drugs in America today.

Vyvanse is lucrative not only for the pusher on the street, it is wildly profitable for the drug traffickers of big pharma. In one year alone, 2016, Vyvanse generated revenues of $3.1 billion (!) for Shire Pharmaceuticals. And no different than the dope dealer on the street, Shire uses slick lies and deceit to create addicts and customers for the sake of ill-gotten gain.

They follow the big pharma playbook of conspiracy on a massive scale:

Step 1) Invent a new “mental illness”: binge eating disorder or BED . (Can’t say no to dessert? You have BED.)

Step 2) Vote BED into the newest edition of the bible of psychiatry, the 2013 DSM (Diagnostic and Statistical Manual of Mental Disorders).

Step 3) Turn a simple amphetamine into the next wonder drug and charge $300 for a bottle of 30 addictive pills .

Step 4) Spend millions on a slick marketing campaign promoting BED: websites, checklists, celebrity endorsers . (If you or a loved one suffers from BED, ask your doctor about Vyvanse.)

Step 5) Include $57 million in marketing costs to pay inevitable US Department of Justice fine — September 2014 — for making false claims .

Step 6) Pay psychs kickbacks to prescribe Vyvanse. Shire has paid more than $5 million to doctors for this very reason .

Step 7) Hook millions on an addictive class II narcotic and flood the streets with speed, bennies, cartwheels, and uppers.

Zoloft for depression, Xanax for anxiety, Concerta for ADHD. Millions of addicts, billions in revenues every year.