He had used them, authorities said, to bilk the government out of money for the poor.

When Dorval pleaded no contest to a felony grand theft charge, it should have barred him, by law, from working for Florida’s Department of Juvenile Justice.

And, like Dorval, other doctors have emerged from past troubles and gotten jobs at DJJ – with authority to prescribe drugs to kids in state jails, a Palm Beach Post investigation has found.

Some psychiatrists took DJJ jobs after they were cited for breaking the law, making grave medical missteps or violating state rules. Others were hired after they were accused of overmedicating patients, sometimes fatally.

All were empowered to prescribe drugs to jailed kids as powerful antipsychotic pills flowed freely into Florida’s homes for wayward children.

“It’s appalling. A psychiatrist is a psychiatrist. They’re licensed, they’ve been to medical school, and there is a certain trust placed in that person’s judgment when they tell you that this child needs to be medicated,” said John Walsh, an attorney with the Palm Beach County Legal Aid Society who has represented children in juvenile court. “This just illustrates that we always have to be on guard with children.”

In two years, Florida bought hundreds of thousands of tablets of Seroquel, Abilify, Risperdal and other antipsychotic drugs for children housed in state-run jails and programs. The meds were administered in a juvenile justice system that doesn’t track prescriptions and has no way of telling whether doctors are prescribing to make kids easier to control.

In some jails and homes, pills were prescribed by psychiatrists who took huge speaker fees from companies that make antipsychotic drugs, The Post found. In others, the task fell to doctors with troubled pasts.

In response to the newspaper’s first reports, published last month, DJJ Secretary Wansley Walters launched an investigation into the department’s use of antipsychotic drugs. DJJ officials declined to discuss The Post’s latest findings, citing the probe.

Spokesman C.J. Drake acknowledged, though, that the department has struggled to find psychiatrists willing to work in jails and programs. He also said DJJ sometimes has relied on companies that employ a stable of doctors, rather than signing a contract with a single physician.

As a result, Dorval went to work in a Broward County jail for children – even though he would have failed a state-mandated background check required by the contract.

In the late 1990s, Dorval claimed he was providing juvenile delinquents and other vulnerable children with needed therapy. Instead, state investigators said, he used bogus counselors to bill Medicaid for more than $350,000 in fraudulent claims.

He charged the government for offering more than 24 hours’ worth of children’s therapy in a single day, investigators said, and structured the scheme around kids who were homeless or in DJJ custody or foster care.

He tended to bill “for those children that the system ‘lost,’ ” according to an affidavit for his arrest.

Originally charged with four felonies in Broward, Dorval pleaded no contest to one count of grand theft in 2004.

Later, to keep his medical license, he agreed to pay $10,000 and was suspended, reprimanded and put on four years’ probation.

Although a judge withheld a formal finding of guilt, the plea disqualified Dorval from seeing patients in a juvenile jail. Even so, his employer, Miami-based Compass Health Systems, sent him to work at the Broward Juvenile Detention Center between August and December 2007.

No one screened his background beforehand.

In written responses to questions, Dorval said he was doing as he was told when Compass sent him to work in the Broward juvenile jail.

“At that period you cited, the psychiatrist that was seeing patients at the DJJ was out. Therefore I was designated by the management office to go and cover for that psychiatrist, until they switched me again to another place. I was not aware of any wrongdoing,” wrote Dorval, who stressed that he never signed a contract with DJJ. “I am only an employee. Wherever they send me to work I have to go.”

As for the criminal charges, he offered this explanation: “This case was a simple matter that became complicated, because my first lawyer messed me up.” After wrangling over the facts, “they decided to offer me a plea that would allow me to get a chance to fight for my license to practice medicine,” he wrote. “It was a real nightmare that generated in me a post-traumatic syndrome that I will never forget.”

DJJ had no contract with Compass as of May, records show.

In state-operated jails and programs, the rules say DJJ must screen doctors’ backgrounds and verify that physicians’ hold valid medical licenses. In privately run programs, which house the majority of children in the department’s custody, that responsibility falls to contracted companies.

Such screenings don’t catch everything: Doctors who kept their licenses after the state accused them of serious lapses have gone on to work in juvenile jails and homes.

Dr. Charles J. Dack is an example. For six years, Dack, a Lakeland-based physician who is board-certified in addiction and child psychiatry, prescribed a cocktail of antidepressants and powerful painkillers, including methadone and morphine, to a patient named Mary Tuxbury.

Eventually, Dack ramped up the doses of pills Tuxbury was taking, keeping her “at a toxic level of morphine for approximately two and a half years,” regulators from the state health department said. In March 2002, Tuxbury was found dead. She was 42.

Regulators charged Dack with failing to meet care standards and inappropriate prescribing. Dack settled the allegations in August 2007. He admitted no wrongdoing but agreed to pay a $7,000 fine and complete a course on “misprescribing” drugs.

A year later, he was hired to care for children at three privately run programs in Central Florida: Wilson Youth Academy, Peace River Youth Academy and New Beginnings Youth Academy. He worked in the homes until April.

Other DJJ doctors weren’t cited by regulators, but they were accused in court of fatal neglect. Roughly one in eight of the psychiatrists who have worked for DJJ in the past five years has settled a malpractice lawsuit in Florida, records show.

Among these was Dr. Samuel McClure. As a psychiatrist in Orlando, McClure diagnosed an 11-year-old boy named David Morganthal with attention deficit disorder. He prescribed powerful, mind-altering drugs for David – even though the child was much smaller than other kids his age, according to court documents.

One morning in November 2001, David’s mother woke to find her son dead on the floor of her double-wide mobile home. When they laid David out at the morgue, he measured less than 4-foot-2 and weighed 49 pounds.

Lab tests showed his blood contained an unusually high concentration of an antidepressant: about 60 percent more of the medication than doctors had expected.

The autopsy concluded the boy probably died from a seizure and heart problems caused by “reaction to prescription medication.”

In 2004, Patty Morganthal sued McClure, the health care company he worked for and others over the death of her son, alleging medical negligence.

While the civil suit still was pending, McClure was hired in January 2006 to care for kids in DJJ’s Frances Walker Halfway House and Brevard Group Treatment Home.

McClure worked in DJJ programs until June 2009. He couldn’t be reached for comment.

Still another DJJ doctor got hired after he accidentally overmedicated kids with an antipsychotic drug during a clinical trial. 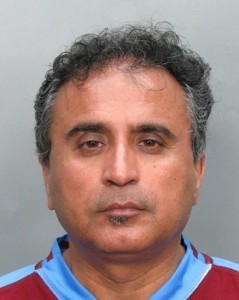 In summer 2006, Dr. Sohail Punjwani of Lauderhill tested the Pfizer drug on seven children between the ages of 10 and 16. Six of those kids were overdosed, according to a 2010 warning letter to Punjwani from the federal Food and Drug Administration.

One 13-year-old “was overdosed on study medication for 20 consecutive days,” the FDA said, and he emerged experiencing “sedation and dizziness.”

Eighteen months later, Punjwani, who is board-certified in adult and child psychiatry, went to work in the Broward Juvenile Detention Center, placed there by his employer, Compass. He evaluated kids in the jail until June 2008, records show.

Soon after, while working for the state foster care system, he began seeing a difficult patient, 7-year-old Gabriel Myers. Punjwani prescribed mind-altering drugs for the boy, including a combination of an antipsychotic and an antidepressant. In April 2009, Gabriel hanged himself in the shower of his Margate foster home.

A work group formed to study the death never assigned blame to Punjwani, and he was not disciplined by state regulators in the widely publicized case.

A 2010 report by the FBI’s Behavioral Analysis Unit, which consulted with a forensic psychiatrist on staff at Walter Reed Army Medical Center, concluded “the medications that were prescribed for Gabriel may have contributed to his actions directly prior to and during” his death.

In an interview, Punjwani said Pfizer’s 2006 study was flawed, citing a 2010 FDA warning letter to the drug company, and added that his medication errors stemmed from a mistake by a nurse. He acknowledged, though, that he failed to build in a control that would have prevented overdosing.

Punjwani said he saw “very few” children at the DJJ jail who were taking mind-altering drugs. For these kids, he simply reviewed their files and maintained them on their meds, he said.

And in Gabriel’s case, Punjwani said he feels he was a scapegoat.

“My care was totally appropriate and, according to some psychiatrists, went above and beyond the standard of care in the clinical community. Because I saw the patient on time, I had appropriate follow up, I had documentation,” he said.

The way his critics portray him, “I look like a child killer,” he added. “It’s sad. I’ve been in practice in psychiatry for 25 years, a double board-certified child psychiatrist. Of course there are some bad outcomes. But that does not mean malpractice. That does not mean I’ve been hurting people.”

At a minimum, state contracts required these and other doctors to spend two hours a week evaluating jailed children.

Every week, in jails and homes that can hold a combined 6,000 boys and girls statewide, children line up to see the psychiatrist.

“If you’re looking at two hours of consultation a week, and there are 100 kids, and 20 or 25 are on psychotropic medications, how much attention can they give those kids?” said DeMuro, who works as a consultant for juvenile justice policy-makers nationwide. “What else are they going to do other than push pills?”