WalesOnline
Psychiatrist laughed at one patient’s scar and talked about sex with another, tribunal is told
Jul 22, 2014 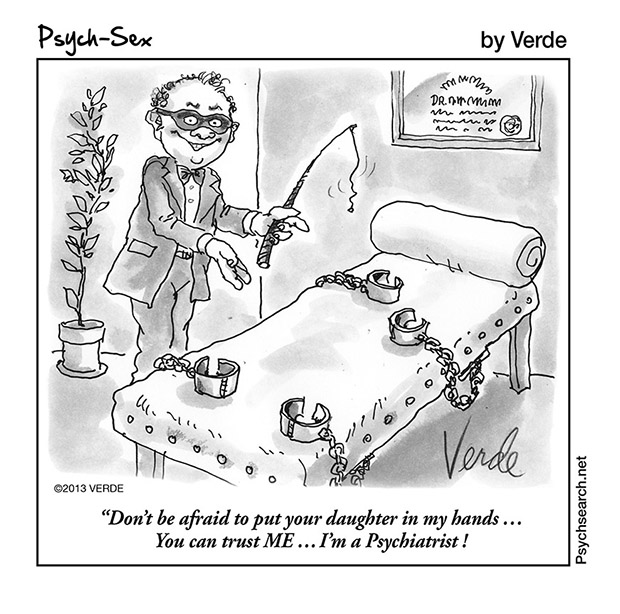 A psychiatrist laughed at a patient when she showed him a self-harm scar on her abdomen and told her to see a plastic surgeon if she wanted to “get rid of this fat”, a tribunal has heard.

Dr Adbulrahim allegedly behaved inappropriately towards three patients at a Powys hospital between May and August 2011.

One stunned patient was left “in a spin” when the doctor allegedly started talking about sex before he advised: “Foreplay is very important”.

Another woman with severe psychiatric problems claims the Sudan-trained medic repeatedly tried to hug and kiss her after telling her she was “beautiful and intelligent”.

Abdulrahim also tried to kiss a colleague and touched her breasts at a Worcestershire hospital, the Medical Practitioners Tribunal Service heard.

The former staff grade locum psychiatrist, who has not worked since the allegations emerged in 2011, could be struck off the medical register if the allegations are proved.

Paul Wakerley, for the General Medical Council, told the hearing: “The case concerns a series of allegations, we say, covering a breadth and variety of serious concerns about Dr Abdulrahim – concerns in relation to vulnerable patients, who were receiving psychiatric care in a clinical setting, where he was one of the doctors responsible for their care.

“It also concerns allegations of his behaviour towards a colleague in the workplace.

“There is also sexual misconduct, we submit, in this case and the GMC ultimately submits… that the doctor’s fitness to practise is impaired by reason of this misconduct.”

Abdulrahim’s contract with the Powys hospital was terminated shortly after a woman, referred to as Patient A, complained about his behaviour in August 2011.

The woman, who was suffering from severe psychiatric symptoms including hearing voices, said she was alone in her room when the doctor came in on August 10, 2011.

He had previously told her that she was “beautiful and intelligent” and asked for a cigarette, it is alleged.

Mr Wakerely said: “He sat upon her bed and in the course of what followed hugged her and kissed her on the cheek in what she describes as a ‘peck’, then hugged her again.

“She describes becoming ‘squeamish’. He tried to kiss her again, but by this time she was moving towards the door.

“He knew at the time what he was doing was wrong as he kept asking her if she was ‘okay’.

“Despite her saying ‘no’ he hugged her for a third time and it was she that said he should remain professional.’

The woman, known only as Patient A reported the alleged incident to members of staff and Abdulrahim later made “partial admissions to inappropriate behaviour”, the panel heard.

The tribunal heard that he told bosses “if my lips caught her face it was by accident in the course of a hug”.

But when his locum contract was terminated he withdrew what he had said and asked if he was going to be arrested, it was claimed.

The GMC allege his conduct towards the patient was “sexually motivated”.

Another complaint was made by a woman, referred to as Patient B, who Abdulrahim consulted at the same hospital around July 27, 2011.

“She was a vulnerable patient with an eating disorder,” Mr Wakerely told the panel.

“She describes an incident when he came into her room to examine her and he did have a chaperone with him at that point.

“She revealed her abdomen to him as part of the examination. She had earlier seriously self-harmed herself, cutting open the abdomen, needing numerous stitches to repair it.

“Dr Abdulrahim examined her and his reaction was to laugh at her and say to her ‘surely you know you should go to a plastic surgeon if you wanted to get rid of this fat’ or words to that effect.

“This caused her huge distress and in her words ‘really set me back’.

The medic’s response to the complaint was that he didn’t laugh at her, but may have mentioned a plastic surgeon in the context of “proper therapeutic intervention”.

A third woman, referred to as Patient C, was seen by Abdulrahim around August 15, 2011 at a mental health centre in Powys.

It is alleged that in the course of a discussion about her medication the doctor began to quiz her about her sex life.

“She describes Dr Abdulrahim talking about medication for about five minutes, then, completely out of the blue asking about her sex life, to which she sat and stared at him.

“He told her foreplay was very important and she describes this as ‘sending her into a spin’.”

When asked about the incident the doctor said she had raised the subject of sex, which had been discussed in a clinical context, the tribunal heard.

The final complainant, an employee at a hospital in Worcestershire says Abdulrahim tried to kiss her and touched her breasts when they worked together between March and April 2011.

Known as Witness D, she claims the doctor flirted with her as she took his blood pressure, which she ignored.

“But then he tried to kiss her when she left the room,” Mr Wakerely said.

“She describes a lunge, completely out of the blue and she had to hold a hand up to stop him.

“He knew he was in the wrong as he made an apology to her for his behaviour.”

But he added: “When the two of them were together and they reached a doorway at the same time he reached up and touched her breasts.”