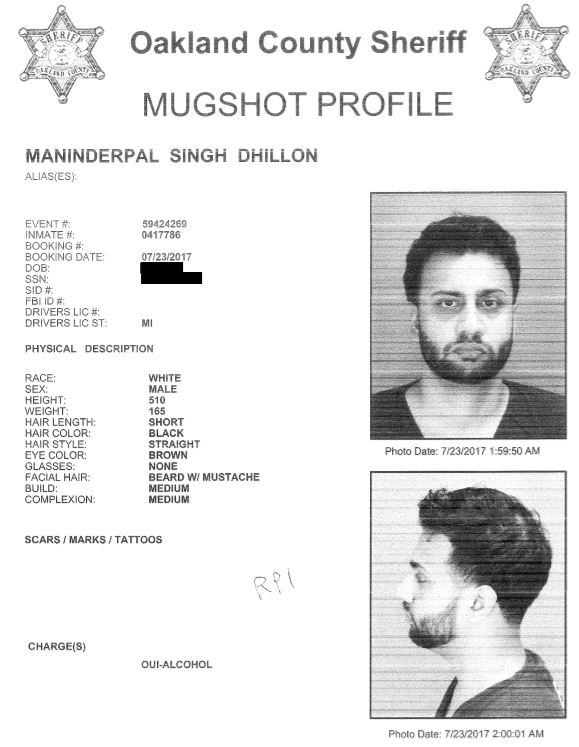 State of Michigan, Department of Licensing and Regulatory Affairs

3. On September 5, 2015, law enforcement responded to an accident involving Respondent’s vehicle. Upon investigation it was determined that the vehicle left the road way at a high rate of speed and crashed into a residence resulting in damage to the resident’s fencing, air conditioning unit, and external siding, as well as extensive damage to Respondent’s vehicle. Respondent fled the scene and was not present when law enforcement arrived. Later that day, Respondent reported in person to the East Lansing Police Department and was cited for reckless driving and leaving the scene of an accident.

4. On February 5, 2016, Respondent was convicted of one count of “Disorderly/Drunk and Disorderly,” in case number 15-2193-D01 OT, and one count of “Disorderly/Fight, Quarrel, Loud, Boisterous Conduct in Public,” in case number 15-2194- D01 OT, both misdemeanors not punishable by imprisonment for a maximum term of two years, in the 54-B District Court in East Lansing, Michigan. Respondent was sentenced to probation for 12 months, jail for 12 days, and ordered to pay fines, costs, and restitution. A copy of the conviction documents, marked Exhibit A and Exhibit B respectively, is attached and incorporated.

5. On July 22, 2017, law enforcement responded to a citizen’s call who was attempting to stop Respondent, who appeared intoxicated, from driving. When law enforcement arrived on scene Respondent’s vehicle was observed backing into a mailbox in the parking lot. Law enforcement conducted a trafl•ic stop, and upon contact with Respondent, observed his blood shot eyes and a strong odor of intoxicants. Respondent refused a preliminary breath test and was subsequently arrested for operating while intoxicated. A chemical blood test revealed a blood alcohol content of 0.14%.

6. On September 28, 2017, Respondent was convicted of one count of “Operating While Impaired by Liquor,” a misdemeanor not punishable by imprisonment for a maximum term of two years, in case number 17-007053-D01 OD, in the 52-3 District Court in Rochester Hills, Michigan. Respondent was sentenced to one day of jail, probation for 18 months, and ordered to pay fines and costs. A copy of the conviction documents, marked Exhibit C, is attached and incorporated.

7. Respondent failed to notify the Department of the February 5, 2016 and September 28, 2017 convictions within 30 days of the convictions.