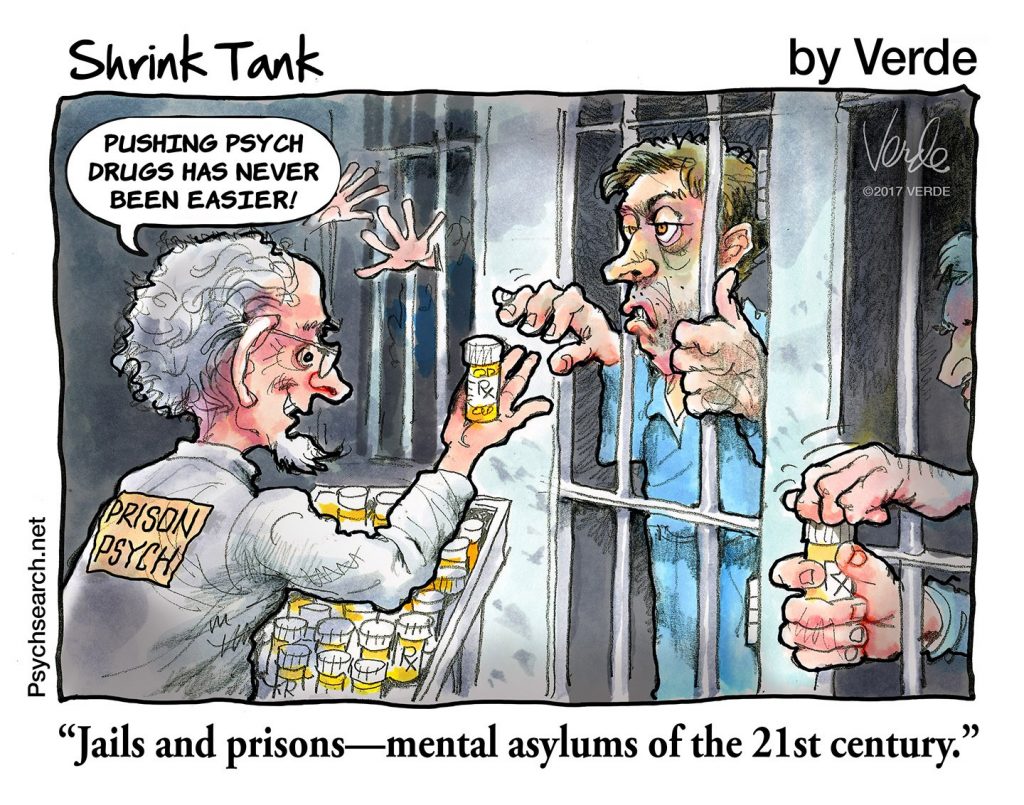 Select Quotes to PsychSearch from Law Enforcement and Mental Health Advocates about the incarceration of the mentally ill:

“Jailers and prison guards are not social workers, nurses, or doctors. People with a mental illness get no treatment for their condition while in jail or prison. They are medicated (sedated) with the cheapest drug available to keep them from being a problem for staff. There is no consideration given to their needs. They are often placed in solitary confinement more often and for much longer than other inmates.” – Mental Health Advocate, Central Oregon

“As a provider of last resort, county jails (and prisons) have become the de facto mental health providers for many of our most critical needs patients. County jails are not equipped, nor structured to have successful interventions with such a demanding population.” – Sheriff, Iowa

“Our mental health system is a joke! I have worked in Law Enforcement since 1993 and it has not improved at all in that time period, in fact, I testified before the Arkansas Legislature in 1989 about the State's Mental Health System's revolving door policy.” – Sheriff, Ohio

“Our prisons were created for punishment (not healing). That culture is deeply ingrained. Inmates with serious mental illnesses are frequently seen as ‘problem prisoners’, since they often cannot control their behaviors, when symptomatic. So they are thrown ‘in the Hole’. Despite the fact that many reports have been made – including
by the UN, the ACLU and NAMI – stating segregation actually worsens these serious mental illnesses, and the use of it for anything longer than seven days may cause irreversible brain damage. The UN has repeatedly said they believe any solitary confinement lasting more than 15 days can be considered cruel and inhuman treatment and even torture.” – Mental Health Advocate, Southern Oregon

“It’s a sad day when mental health services want law enforcement to come up with a crime in order to arrest the patient, simply because they have nowhere to place them. I can only believe that placing someone who is suffering from a mental illness in jail without just cause could only exacerbate the problem and could cause tremendous damage to the person.” – Sheriff, Kansas

“Yes! The jails and prisons have become the new mental institutions. The doctors who are contracted to work there are second rate. After all, what ‘good’ doctor would spend his or her time working in a prison?” – Mental Health Advocate, Tennessee

“Prisons can make any sane person crazy. This country locks up more people per capita than any other.” – Mental Health Advocate, New Jersey

“Even when one is in jail (here), and their meds taken to the jail, there is no guarantee they will be administered correctly by the staff, nor in a timely fashion. (Does anyone even know the reason for the medication being taken, let alone when/how to administer?)” – Mental Health Advocate, Kentucky

”I don't run our jail, I'm the Captain of Field Services (for the Dunn County Sheriff’s Office), but I can say that our mental health issues in society as a whole are higher than I've ever seen in my 28 year career in law enforcement.” – Sheriff’s Office Wisconsin

“Jails and prisons have definitely become the 21st century mental asylums. I think you can find data from the Department of Justice and the Treatment Advocacy Center which confirms this fact. Here in Montana we have more individuals receiving psychotropic medication at the Montana State Prison than we have the Montana State Mental Hospital.” – Mental Health Advocate, Montana