Skip to content
Previous Next
The Lie That Kills

PsychSearch.net
The Lie That Kills and Makes Psychiatry Billions: Chemical Imbalance in the Brain
By Colin Taufer
April 2018 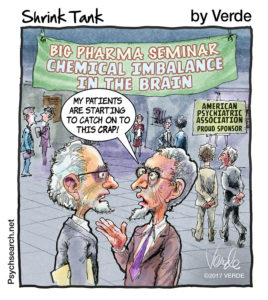 In late 2015, Mike Arens’ family was faced with the gloomy and joyless task of piecing together how their fifty-four year old son, brother, and friend was found dead in his Minnesota home. It didn’t take them long to find out how he died and who killed him. Inside Arens’ house they found hundreds of empty pill bottles, all of them prescribed by the same person, psychiatrist Faruk Abuzzahab .

Abuzzahab prescribed at least eight different psychiatric drugs to Arens while at the same time receiving tens of thousands of dollars in payments from big pharma for recruiting patients for their drugs .

It’s a story of corruption, lies, and killing that repeats itself every day. A drug pusher psychiatrist acting as a dealer for big pharma hooks another patient on a deadly cocktail of multiple psychotropics to “modify one’s brain chemistry” . The psychiatrist gets a kickback from big pharma and big pharma has another addict in its grip. Their profits roll in while the patient dies a little each day.

This is a dirty money operation that makes obscene amounts of earnings for psychiatrists and big pharma alike. A few years ago the antipsychotic drug Abilify was the best-selling drug in the U.S. with sales of $7.5 billion in one year . A big reason for this record windfall was Abilify’s price: around $800 for a bottle of 30 tablets.

Paying out $10.6 million directly to doctors to push Abilify and $535 million to the U.S. Justice Department for its deceitful marketing is small change for the manufacturers of Abilify , Bristol-Myers Squibb .

The biggest lie is the one which underpins the core myth of psychiatry, the lie of the chemically imbalanced brain . No such thing exists. As much as psychiatry wishes it to be true, it is not. Neither psychiatry or big pharma, despite the decades and billions they’ve spent, have proven this myth correct .