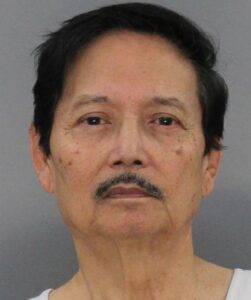 A Kearney psychiatrist will serve nearly a year in jail for sexually assaulting a female patient.

Reynaldo A. de los Angeles, 77, was sentenced in Buffalo County Court to 364 days in jail for misdemeanor third-degree sexual assault without consent. Judge Gerald R. Jorgensen Jr. gave de los Angeles one day credit for time already served. He will begin his jail sentence Jan. 2 at the Buffalo County Jail. He must also register as a sex offender.

In August, de los Angeles was convicted by a jury of five men and one woman for sexually assaulting a female patient on Aug. 25, 2021, at his Kearney office. In October, his medical license was temporarily suspended, according to the Nebraska Department of Health and Human Services website.

Eight days after de los Angeles was convicted, he was charged with misdemeanor third-degree sexual assault in a separate incident. The incident is alleged to have happened between March 1, 2021, and March 31, 2021. The case was later amended to include a second charge of misdemeanor unlawful possession of a prescription drug.

De los Angeles has pleaded not guilty to the charge of sexual assault. The charge alleges de los Angeles subjected a person to sexual contact without consent of the victim. Records detailing the incident are sealed. A jury trial is scheduled for Jan. 9 in Buffalo County Court.